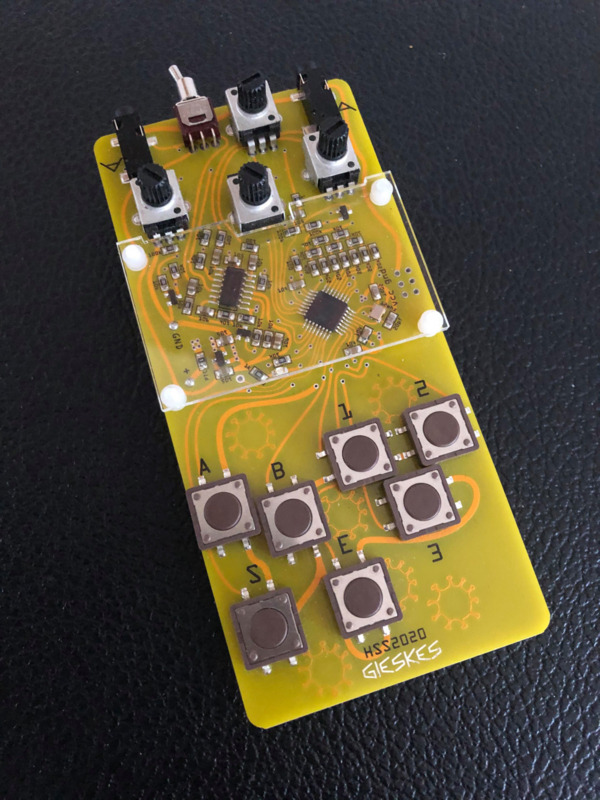 The first HSS2 was made in 2008 around the time of the financial crisis, since then allot has happend, Arduino spread around the world and electronics become easier and easier for everyone to make.

Now in 2020 ???? has arrived and im stuck in a apartment with very little space, what i can do is mostly just things on my computer, developing a pocket operator compatible version of the HSS2 seemed like a good idea for this situation, it is small and there are few components so i could breadboard it here. Looking at the PCB of the original HSS2 i got reminded of the curved traces, i never really used this feature in Fritzing (a feature request i did that got accepted ????) this seemed like the ideal moment for it. When designing the layout the arduino TQFP package looked like a little ???? with the via's and the curved traces, fitting very good in 2020.

It works best with NiMH batteries because the have a discharge curve that make the battery have keep a similar voltage over a long period in time. It keeps the voltage of one battery between 1.2volt and 1volt till it suddenly loses all its power. And you can recharge them, which is good for the environment and save you money in the long run.
I have not measured the current consumption yet, but my guess is that it can run for a few days on 1 charge.

Hacking: If you decide to power the device with a power plug you connect it to the + and the GND of the battery connector, maximum voltage is 13v DC, i would use a 9v power supply or a 5v power supply, the lower the power the better it is.

A with direction to the device (left connector): This is the audio and trigger input.

On bootup it will load what has been saved, to save everything you can hold the E button and click 4 times on the S button, the last time you click on the S button hold it down for 4 seconds then you will hear the sound change as long as the sound is different it is saving (dont power down while saving).

Hold the S+A buttons and turn the middle potmeter, turn it all the way to the left for 0 speed when you use trigger inputs.

Press the S+1 or S+2 or S+3 buttons to select a sequence bank, pressing a bank twice will make the bank playback twice before jumping to the next bank there are a maximum of 64 bank sequence steps.
When you have recorded a bank sequence you can still record sounds over it using the 1,2,3,A,B buttons (can be fun to do because it is unpredictable).
Be aware that the recorded bank sequences will be saved also when you save, this can be confusing when you bootup the next day.

When there is no sequence recorded with the buttons 1&2&3 the buttons A&B can be used to select out of 3 diffrent digital effects. The effect will play over the audio that is coming in, You can turn the middle potmeter while pressing the buttons to record the effect.
Press A: sample looper effect.
Press B: pitch shift (only up).
Press A&B: delay.

Upload using ICSP via arduino IDE (take out the batteries when uploading via USBTinyISP).