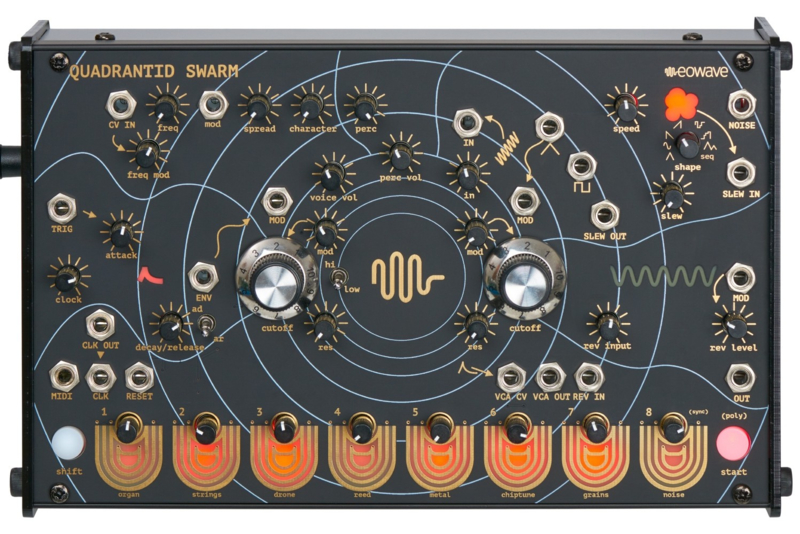 We deliver this included power connectors and screws

or built in your rack .Only errorinstruments .Have this .

Quandrantid Swarm is a unique instrument suitable for musicians and sounddesigners alike. It is composed of a digital synthesizer voice with percussion element, two analog filters, a LFO and a spring reverb. The touch keyboard can be played in a monophonic or polyphonic mode. Alternatively, it is usable as a step sequencer. Quandrantid Swarm features MIDI and CV / trigger connectors.

The Quandrantid Swarm is a desktop touch synthesizer designed for creating rich and unusual soundscapes.

The oscillator is based on a digital wave generator. The Spread potentiometer multiplies the waveform up to eight waveforms, when the synth is in sequencer mode. The Character knob controls various effects depending on the mode.

An additional percussion voice is tied to the findamental frequency of the main oscillator. The type of synthesis implemented is different for each mode. The length of the sound is determined by the Decay Length potentiometer.

The mixer provides three inputs, one for the oscillator, one for the percussion voice and one to connect an external source. The third input is pre-patched as a feedback for the spring reverb, enabling overdrive.

For tone scultping the Quandrantid Swarm features two analog filters with a slope of -12dB, based on the eowave 'fluctuations magnétiques' module. The first filter can be switched between high and low pass. The second filter is a low pass. Using both together enables to create a bandpass, allowing for rich and deep sound design.

The synth offers two modulation sources. The first is an envelope, pre-patched to the cutoff of the filter 1 and to the VCA. The second is an LFO, pre-patched to the cutoff of the filter 2. The LFO provides seven selectable waveforms using the Shape knob. Its rate is set thanks to the Speed potentiometer. Furthermore, the noise output is linked to the speed of the LFO. A squarewave output has been included which can be useful for triggering clock resets and other timing functions. Additionally, a slew limiter with input, output and attenuator has also been implemented to smooth control voltages.

The envelope provides two controls: attack and release length. It is normalled to the VCA CV input.

Finally, an analog spring reverb adds a lot of character. The reverb section can be used independently of the synth with your devices via the dedicated Rev input. This input is normalled to the output of the VCA. Thanks to a Mod input, the level of the reverb can be modulated.

The Quandratid Swarm includes a standard MIDI to 3,5mm adaptor to connect it to a MIDI setup. CV, trigger, clock and reset inputs are also featured to use with Eurorack.