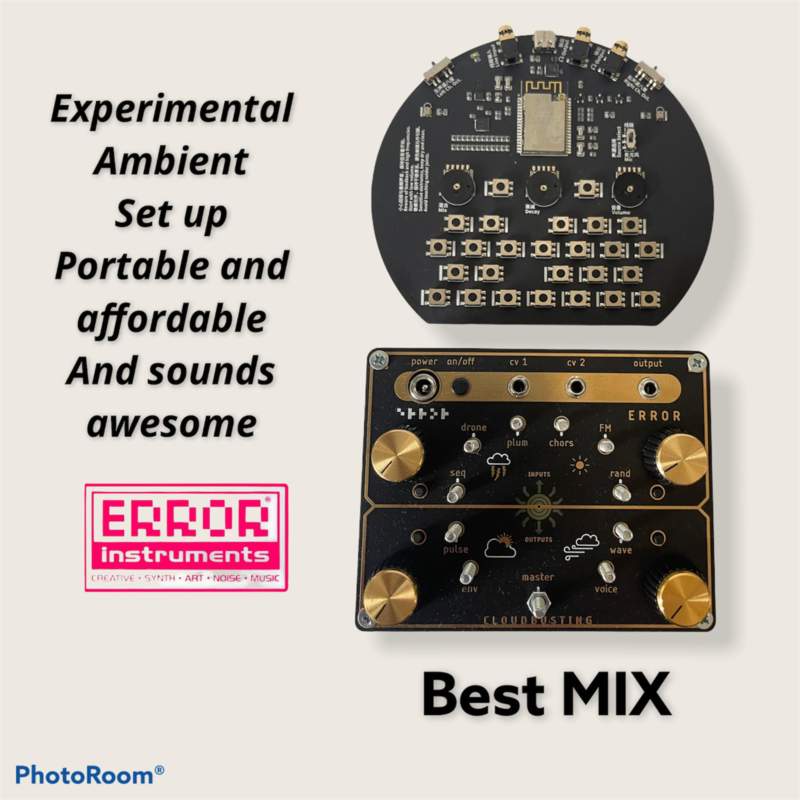 Of a instrument of ErrorInstruments and mengqi Music

Because this set up it’s nice To play together

with a lot of harmonic possibilities

It comes with extra cables

To play around Check out the demonstration videos

After the success of cloudbusting eurorack

. To play together with Standalone equipment or just guitar Effects or pedals

Cloudbusting is a full Modular experimental synthesiser .It has 11 points that can be patched . 6 modes .Modulation points but also Audio with experimental sounds . Most famous sounds that are used for experimental purposes. as deep Drones .And also the Inspired sound of the plum . The sound of ciat lonbarde plumbutter / Rolls5 Also some weird frequency modulation . And a lot more

Wingie from Meng Qi is a handheld stereo resonator that is the perfect companion for interacting with instruments, vocals, and the world around you. It features two microphones that pick up vibrations from the air, as well as a stereo line input.

Wingie's three primary controls are mix, volume, and resonator decay, from .15 to 10 seconds. Wingie features four modes: Bar, String, Special, and Poly. Each mode interacts with incoming sound in its own unique way, highlighting and picking out timbres and harmonics. It also features two audio outputs, intended for both driving headphones and creating feedback loops. On top of this, Wingie also functions as a development board for exploring other projects. Wingie is a musical instrument intended for sonic exploration with your instruments, voice, and sounds in your environment, able to process and reinvent even the seemingly mundane.