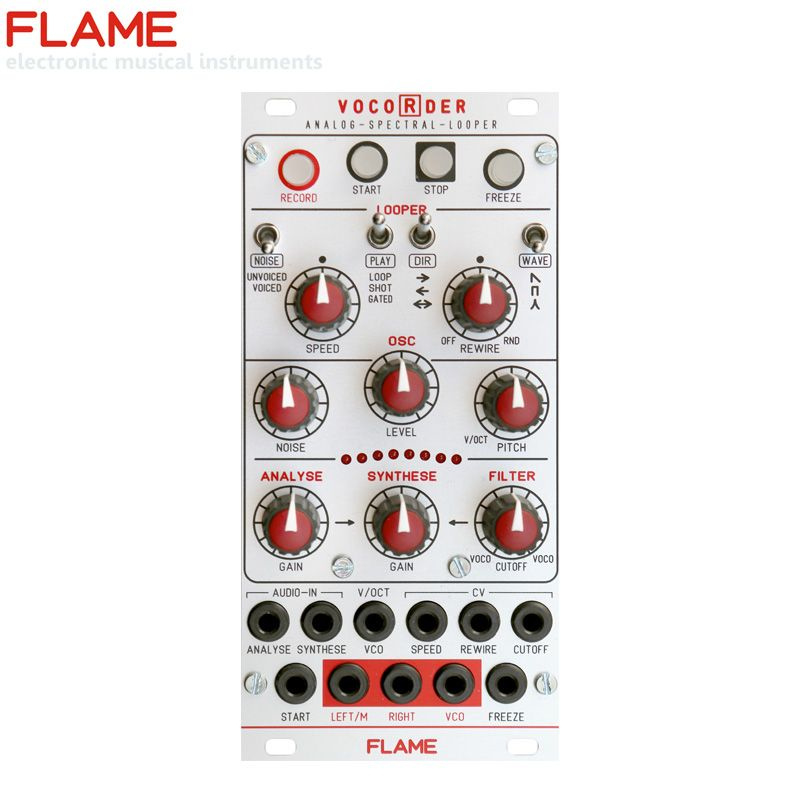 The Flame Vocorder module is a compact combination of an analogue vocoder and digital CV recorder (looper). At its heart is an 8-channel analogue vocoder with a total of 16 analogue bandpass filters for analysis and synthesis.

The analogue analysis envelope CVs are digitised and output to the analogue VCAs of the synthesis bands via a DA converter.
With the help of the record function, the envelope CVs of the analysis channels can also be recorded digitally and played back in the loop. You can manipulate the playback in different ways: swap channels on the fly (rerouting), change speed and playback direction, etc.

The module can also be used for "normal vocoding": the envelopes are always looped through via AD/DA conversion (direct vocoding) and can of course also be recorded. During playback, the analysis unit is ineffective because the envelopes are played back from the memory.

There are two audio inputs for analysis (voice, drum etc) and synthesis (instrument).
For internal synthesis, there is a monophonic digital oscillator with three waveforms and an analogue noise generator. There is also an unvoiced/voiced switch (controls the highpass with noise for sibilants). A respective mix control is responsible for both synthesis sources.
The VCO has a 1V/oct input and an additional direct audio output.
The synthesis filters have audio outputs for odd/mono and even (mixing of even/odd channels).

The looper-recorder has the following functions: Record, Start, Stop buttons.
A triple toggle switch for playback direction forward, backward, ping-pong, another for the type of triggering: loop, one-shot, gated.
You can record for about one minute. The playback speed is adjustable (also via CV).
The sampled loop remains in the battery-buffered memory even after switching off.

In addition, there is a control for rerouting the filter channel assignments from analysis (or recorded channel) to the synthesis filters, also accessible via CV. A freeze function is also available.

The Filter/Cutoff knob manually controls the synthesis bands with a combined lowpass/bandpass/highpass algorithm, so the synthesis filters can also be used as simple audio filters.