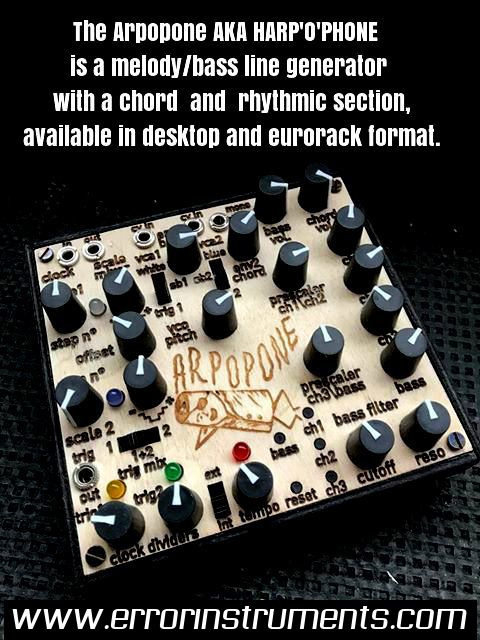 The Arpopone AKA HARP'O'PHONE is a melody/bass line generator with a chord  and  rhythmic section, available in desktop and euro rack format.
It is based on analog ramp divider, similar to those used for the Multicassa which are inspired to Oskar Sala's  Mixtur Trautonium, an early electronic musical instrument.
Each divider generates a voltage ramp starting from a master clock (internal or external)
a potentiometer is used to set the number of steps and thus the division ratio with a minimum of 1.
There are ten of such divider in the different sections of the instrument:

- 2 for the rhythmic section (trigger pulses 1 and 2)
- 2 for the scale generator, these have a ramp output that forms the melody line
- 6 for the audio dividers, the 2 prescalers are chained with 4 note dividers, one for bass    and 3 for chords

A further divider comes into play if external clock is selected, in this case the BPM control acts as a clock divider making possible the synchronization with other instruments (at maximum speed divider=1

EXT-INT: select internal clock (set by BPM) or external clock (via the EXT CLOCK IN) the EXT CLOCK OUT pulses are synchronous with the RED led flashes.
The Apopone accepts any type of clock pulse or square wave of 3/12 volts amplitude, with any polarity including the Midi clock (with custom cable) as long as in the midi bit line is present only midi clock message and no other messages like, notes, control changes, sysex, etc.
When in external clock, tempo pot. works as clock divider for the incoming clock in pulse, this is useful for divide fast clock like midi or synch 24 for slow clock like Korg volca series keep the divider to 1, tempo pot to max.

TRIG1 TRIG2 : set how many clock pulses are needed to flash the GREEN and YELLOW led

DIVIDERS : the two trigger output are the rhythmic section of the instrument and are used for playing notes and advance notes of the scale generators the division ratio is 1 to around 40

TRIG MIX : selects a single trigger (1 or 2) or both (1+2) to advance the scales the output of TRIG MIX is also fed to the TRIGGER OUT

SCALE #STEP : Sets the number of steps for the two scale generators that, added together by the SCALE MIXER will play the melody on the VCO.

The pulses selected with TRIG MIX are sent to two scale generators, each scale generator outputs a voltage that increases in steps.
The brightness of the two led's (WHITE and BLUE) are proportional to the output voltage giving an indication of the current position in the scale.
The  number of steps is set by the two #STEP controls from a minimum of 1 to around 40.

In the mixer section the two scale are summed together to obtain a more complex pattern, the amount of each scale can be set by two controls and can be positive (ascending scale) or negative (descending scale).
In center position the amount is 0 (steady note) an OFFSET control set the minimum voltage and hence the lowest note that can be played.
Be aware that these are NOT tempered scales, all micro intervals are possible
fine tuning of the melody being played is done with these three scale mixer controls.

The notes are played by the vco, the VCO PITCH transposes the melody maintaining the same interval between notes, as set through the SCALE MIXER.

The note generated by the VCO is fed to a chain of dividers to obtain 4 sub harmonics of the original note, one of these is the bass section with its own filter and envelope, the other three form the chord section with their envelope.
Each divider is similar to the trigger dividers with the difference that it acts on notes and not on rhythms generating a subharmonic sequence:
for example if the note produced by the VCO is C4 the output will be:
(rotating from left to right) C4,C3,F2,C2,Ab1,F1,D1(not really),C1,Bb0...
Two prescalers are used, each of them is chained with two dividers that further divide the note, the same way many types of chords can be generated by setting the proper dividers each single divider can be played separately by means of  the four buttons in the MANUAL PLAY section one for the bass the other three for each note that form the chord (CH1,CH2,CH3)

The bass channel is passed through a resonant low pass filter with CUTOFF and RESONANCE control.

Finally the two channels BASS and CHORD are mixed together, the output level is set by the BASS LEV and CHORD LEV controls.
Two outputs jacks are present: the mono OUT jack on the back panel and the STEREO jack on the front panel useful for listening with phones and for separate channel out.


Power also non-stabilized 12 volts with + central tip There are two power inputs, one can be used for power link another device with custom cable.
A SIMPLE BEGINNER'S TUTORIAL

Connect power (12 V.) and an amplifier or headphones

Start with all the controls to mid position

Move TRIG1 and TRIG2 to the left position (counterclockwise) : GREEN and YELLOW will flash at the same rate as RED.

Slowly raise TRIG1 or TRIG2: the sound and flashes will slow down always in sync with RED flashes

Let's work on sound : adjust BASS ENV, BASS LEV, CUTOFF and RESONANCE for nicest bass the chord section may need to adjust CH1 CH2 CH3 (start with all at left position) these control along with PRESCALER allow to choose the notes the chord is made of the MANUAL PLAY buttons allow to listen the separate notes, you can stop the clock (EXT position) and try different combination of prescaler and note divider, adjust VCO PITCH to transpose your chords

... if you care about harmony (musician mode ON)

You will notice that all PRESCALER and note dividers play the highest note when in left position (divider=1) raising slowly one of these controls will lead to a subharmonic sequence (frequency divided by 2,3,4,ecc)
If the first note is for example C4 The sequence will be : C4 C3 F2 C2 Ab1 F1 ....
it's easy to get a minor chord setting the three chord dividers to Ab1 C2 F2 you'll get a F minor and  you can transpose it using VCO PITCH.
Major chords are more tricky: set PRESCALER 1 to F2 and PRESCALER 2 to C2, transpose 2 octaves up CH1, will generate a sequence starting from F4 F3 Bb2 F2 Db2 Bb1 ... (the original sequence transposed one fourth up), CH2 and CH3 will play the original sequence C4 C3 F2 C2 Ab1 F1 ...
Now pick a Ab1 Db2 F and you have a major Db chord you can transpose as always with VCO PITCH more other types of chord can be obtained this way (musician mode OFF)

Move one of the SCALE MIXER control: you hear a scale (=sequence of notes) ascending (toward +) or descending (toward -), adjust the number of step with the corresponding SCALE #STEP controls the two scale generator can be mixed at every ratio and an OFFSET control allows to tune the melody, you can still transpose it using VCO PITCH.
Regarding VCO PITCH and OFFSET: it may seem they do the same thing, but it's incorrect VCO PITCH multiplies all frequencies by a fixed ratio and thus transposes a melody leaving  intervals unchanged OFFSET adds a fixed value to all frequencies and so the melody sounds different from the original.