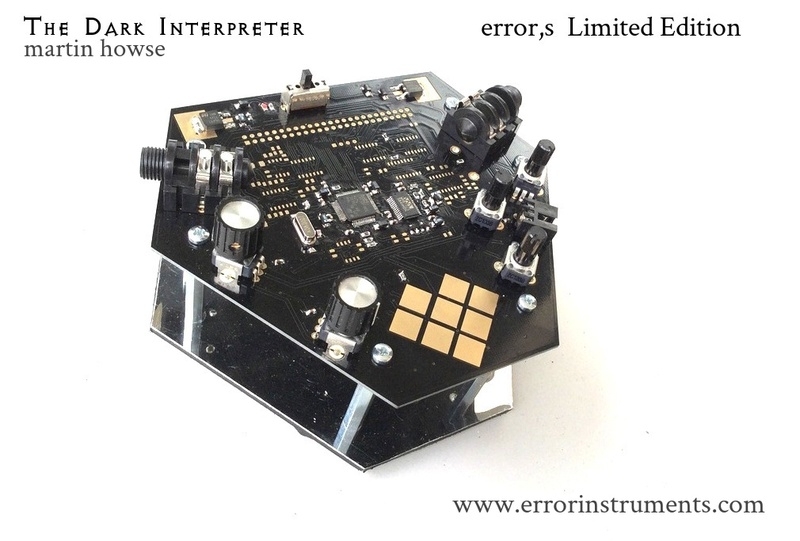 these special editions by  error  and  martin_howse

The Dark Interpreter is modelled as a set of leaky, overlapping medieval village spaces within which various plague simulations run, and through which a motley of villagers (grains) wander, steered by electric fingers and touch.

Following the work of Thomas de Quincey,  re-casts the contemporary noise instrument as a "dark symbolic mirror", placing control of parameters on the skin, and strapping a psyche/plague village interface to the head. This is modern live coding with no screen, no keyboard and little conscious control.

The Dark Interpreter thus seeks to return all contagious execution to the skin, rewriting the history of technology as a plague which has always attempted to shift that site into the earth itself.

The truth I heard often in sleep from the lips of the Dark Interpreter. Who is he? He is a shadow, reader, but a shadow with whom you must suffer me to make you acquainted.

The Dark Interpreter operates as contagious sample or village granulator, distortion, and unique sound generator based on a speedy ARM processor allowing for 16 bit sampling at 48KHz, and with a sample memory of around one second (vastly extended by undersampling).

The Dark Interpreter is delivered in three versions, all fully assembled and tested, and features high quality ALPS potentiometers, optional BOSS style 9v power socket (+9v/positive on the outside, negative centre, minimum 300mA) or battery clip, and full size (6.5mm) JACK input and output sockets. Please note that versions cannot be extended, they are not cross-compatible.