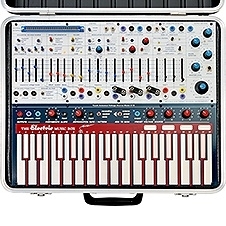 This legendary and sought-after Buchla synthesizer from the 200 series will be produced again after 40 years. There are some minor changes here and there, but in general it´s pretty much the same as the original. MIDI insideand but you get a really well-thought out semi-modular instrument with great sound and lots of possibilities due to well-arranged patch points. The small sequencer and the touch keyboard with an integrated arpeggiatior invite to play the instrument directly and to interact with it.


At the first glance the Easel looks confusing because of too many switches, faders and many sockets without legending, but in the end everything makes sense and is laid out very logically. The colors of the sockets mostly match the function blocks of the Easel (purple = keyboard pressure, yellow = pulser, white = random, orange = envelope, blue = sequencer). The black sockets are CV inputs that are located left of the according parameter. The sockets at the top of the unit have legending and are self-explaining. The position of most banana sockets below the faders has been chosen for the use of shorting bridges instead of patch cords which enhances the clarity of your patch.

The sound generator of the Easel is based on a complex main oscillator and a modulation oscillator. The latter is generally used for modulating the main VCO but it can act as a second VCO and it will be routed into the 2nd Lopass Gate, see below.

The main oscillator can be tuned over 5 octaves with the frequency fader and the response to an incoming CV can be changed with the +/- polarity switch. The waveform is depending on the controls in the timbre section: With the timbre fader and timbre potentiometer set to zero we will get a sine wave. Turning up the timbre potentiometer the waveform blends to a sawtooth, a square or a triangle, depending on the switch. The timbre fader modifies this waveform by the use of a wave multiplier for sounds with high harmonic content.

The oscillator(s) are processed with the Lopass Gates (LPGs). Those are vactrol-based circuits with an organic behaviour and can operate as lowpass filters, as VCAs (gate) or as a combination of both. The audio signal for the 1st LPG always is the main VCO. The second LPG is 180° phase shifted and has a flexible routing: either output of LPG1 (to create highpass sounds due to the shifted phase), the modulation oscillator or an external audio signal. The outputs of the LPGs are mixed in the output section and their levels can be set separately. at the end of the signal chain of the mixer, there´s a real spring reverb with dry/wet control adding more depth to Easel´s sound when desired.

The Easel can be played with the touch keyboard and/or the sequencer. The keyboard senses the amount of skin touching it, resulting in a pseudo pressure sensitivity. It has a range of 2.5 octaves but you can transpose octaves with the four pads on the top right. While normal playing it senses one finger that determines the pitch but when using the internal arpeggiator all fingers are analyzed. The arpeggiator has it´s own tempo control.

The Pulser is an impulse generator you can use as a clock source or as a second LFO. It can self-repeat or be triggered by key gate or the sequencer. The envelope is an AD or a ASR type, depending on the setting and can be triggered by the pulser, sequencer or the keyboard gate. The analog sequencer has three, four or five steps and features gate switches for every step; it´s gate source can be the pulse or the keyboard gate. Interaction of the switch settings and the simultaneous keyboard play can result in really interesting rhythmical structures.

The four touch pads mentioned above can´t only transpose the octaves; in "preset" setting four pre-set fixed voltages can be played to alter the pitch or other parameters.

know you this music instrument sometimes have to wait 6 months