so how did all started? what was your life before "error instruments"?

- my life before error instruments can be described as a life of an artist in making sculptures and paintings. I was making sculptures from robots, called "the beeb" collection. It is a wooden robot with the concept that in the 50's, we have thought that robots will replace our jobs. However, with the influence of the media, and the medicines we take against emotions, figuratively we can say that we are the robot, and we get programmed by commercials and news. This robot has been a big succes due to the fact that it has been bought by numerous art collectors from different countries such as Japan and the United States. Furthermore, the collections had been sold also at auctions houses Christie's. Later on, I have started to work more in fashion and art and making moveable sculptures with electronics, I made also a traditional Dutch blue sculptures, big horse heads with the intention of giving a controversial thoughts and ideas. Moreover, sculptures about religion, which was a mix between Jesus and the corporate companies in the world with the meaning behind it, that they use the same propaganda to control people's mindset. I was also threatened by religious groups from Germany and Belgium during the time of exposition, not only me, but also the other people in the gallery. This situation has got to a point where i had to go to the court, but in the end I was free to go. Later i have done a project for Damian Hurst and made some installations together with BitMove for the "Love of God" exposition in the "RijksMuseum Amsterdam".  As a result, more and more technical and electrical equipments got involved.

when did you have the idea for error instruments and how did the first steps look like?

- First of all, it is important that you know that as a child, i was not able to read, thus it was difficult to go to a normal school, and i have attended a special school, which allowed me to use my creativity, furthermore my writing was always full of mistakes and because in the 80's we used "Commodore 64", and every time i was writing something, a text appeared " Syntax ERROR".  Therefore, the kids at my school, gave a nickname to me , called "Error". As a result, i got a fascination about the things that go wrong with machines, such as glitches or accidentally algoritmes and of course the sound of noises. By exploring the art of circuit bending and hardware hacking, i have found out that many people miss this, because the commercial products were created as a mainstream products, with a result for mainstream music.  Thus, with the money that i have earned from art, I have started the shop, "ERROR INSTRUMENTS".

do you have artistic projects beside error instruments?

- Yes, I perform under the name "ERROR EMPIRE", on several festivals. I have also some conceptional sound projects, called "Pink data". The idea of "Pink Data" is that is not controlled by humans, thus all the music is created by accidental algoritmes. I also make sculptures, with acoustic and electronic purposes. Furthermore, I am busy working on the modelar synthesizer and exploring control voltage. design eurorack modules for and special audience

what is the error philosophy?

- It is all about creativity for special artists, whom are looking for special spices, it is like when you make food and if you use the same ingredients, the food will taste the same, it is  also the same with sounds. People are striving for new, unknown, different sounds to differenciate themselves from others. I make also smaller runs of instruments, like an edition of 5 or 30, or 50 maximum. Additionally I am helping other people to promote and sell their products in my online shop. A lot of young musical instrument creators start there. Such as "Bastl Instruments", "Twisted electrons". I was the first shop selling these instruments and I am still promoting the new builders to have special products in the shop. In the end, it demonstrates that it is about inventiveness.

- I have designed several different error instruments, however i am not able to say an exact number, considering that some of them are still prototypes.  Some of the most popular instruments are the following: "Fertas" , which is a noise instrument with a build in delay, it is a semi modular. Its popularity is due to the fact that it sounds psychedelic. This is a stand alone unit. An other popular product is "Hardcandy", this is eurorack model and also the "Secret Handshake " series. I make a new model this year, it is called "Secret Handshake Gold", it is designed for experimental short sounds, which you can use with the trigger or gate, or CV. It is based on special technology that allows to hear the rolling out of the electricity from the capacitors. It is possible to control this with triggers. Because it has a vactrol in it. Furthermore, it has a nice round peak. You can make crackily, microsounds, but also hard noises. You are able to choose between that it works as a normal "Secret Handshake" model, but also as a drum model. And of course the spikes are also favored.  The spikes are touch interface, analoque, organic, sound source, which can go deep into ultra sounds. The sounds that you usually are not able to hear with human ears. It can  be used also as a controller, it is a mix of twelve different spots, two control voltage imputs, one control voltage out. All these models are analogs and made for experimental purposes.  I also make custom items, for example "Cabinet Bizzare" , which was made for Dr Walker of Liquid Sky Berlin. I have also created some custom spikes for Martin Gore.One of my future plans are collaborating with other brands and companies or artists.  And what is important to know, I strive to have unique, special products, rather than going to going with mainstream flow. But also don't underestimate circuit bending, or Hardware Hacking. There are a lot of electronics waste, which could be made as a nice instrument. I believe  it is important to share with each other, the knowledge for the younger generation because it gives a good feeling to make something interesting out of waste.

comes a few fun and interesting and simple

because everyone has delays and filters in their eurorack

with these small modules you can spread in your set up

and makes and fun playable interface.for little space and money.

so and kind of universal expander for all sound effects

. is a very interesting module. It is a type of oscillator based on feedback from an overloaded chip. which are controlled by three vactrols. the control and the rolling out of the sound influence each other. this is not microcontrol or something. but really generated. out of real feedback it is and sort drum with and karp plus sound. but also low drums. TWO Princes. have two big buttons for remembering your sweet sound seting

scream from the almost blown up chip.

and character. inspired by the shepherd acid sound noise

distorsion and overdoses or feedback and noise

is a simple music box

in eurorack format and extra sensitive pick up

can direct the sound into the. mixer or delay

or sampler so as make noise morphagene

it has a special warm sound. when you take the sample out of the music box

.and play it slower

there are more eurorack modules in collaboration

- I believe, one of my famous client is Martin Gore, from the Depeche Mode.  In the meanwhile, he has collected a nice error collection already. Also Eat Static and many more special artists, whom are working with sound design for movies or other purposes.

you founded your own label, tell us about releasephilosophy, your artitsts.

which releases can we exspect?

- For people who are using the instruments, we are collecting the music they create with the help of these instruments. This is not just a label or for making money, more like promoting the artists in different and alternative electronic scenes.

what are your favourite release formats? vinyl? digital? tape?

- I favor tapes, because if you control the speed of the tape, I enjoy that I am able to make more lofi. But I also like to use wooden USB sticks. Nowadays, it is more practical in the car.

how do you see the future of noise music? noise is not equal noise.

where does the evolution of noise does us bring to?

- I consider that it is not only about noise, it is more about the mix of sounds, just like in the classical type of musics, it is timeless and the way that it is built up the sound structure. It is also a combination between cultures, drons can originate from India and we can mix them with a nice crashed, broken Piano from the West.  Of course, the noise is the ultimate trend for everybody because it is built of HERTZ and frequencies that make you feel good or relaxed and can influence on your emotion. It is also sounds uncommon because if you are sensitive for sounds, it is called  ASMR (Autonomous sensory meridian response). And this is what a lot of people have and they cannot figure out why your brain likes the sound of electronic sparks or the sound of the sea, or the crackle of a final album.

when can we exspect the first pure noise tracks in the offical salescharts?

- In the beginning of 2018. We will consider more performances around the world at festivals,

TEC ART under the name " ERROR EMPIRE" and at galleries as  "PINK DATA". 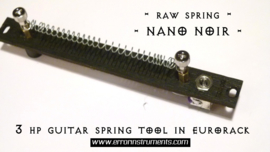