Cutting Room Floor is the most versatile release from Recovery Effects to date. Unlike any effect you’ve heard before, it offers mountains of wild modulation, delay, freeze and stutter. Anything from smooth lo-fi chorus to broken-tape-deck sounds can be achieved with this unique effect. First melt, then freeze sounds in place, or use it as a gritty echo or faux reverb.

The Time knob sets the delay time, which can also be influenced via CV. Altering this parameter during operation leads to pitch effects.
The Blend potentiometer acts like a Dry/Wet.
The level of the output can be controlled by the Volume knob.
It is possible to change the shape of the flutter modulation from triangle to square wave with the Shape knob. The speed of tape fluctuation can be set by the Flutter knob. This is to be used in conjunction with the Wow knob, which controls the level of melting modulation.
It is possible to turn flutter on and off with the Stability toggle-switch, enabling or disabling the fluctuation of the tape speed.
There is also a toggle-switch labeled S/M, which changes the effect from a single to repeated delays, acting like a simple feedback control.
The Freeze button temporarily loops the playback head and locks the audio signal. This mode alters the behaviour of the Blend potentiometer. - It sets twelve o'clock to zero. Rotating the knob to the left models the playback of an Ampex 456. Turned to the right, it models the playback of an Ampex 499.

The module is hand-wired in Seattle, Washington. 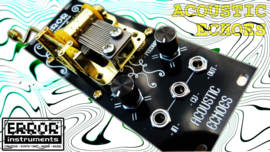