Flame Curves is an analog moving resonance filter bank.
It includes a twelve channel analog filterbank and a pattern player which can be programmed with a software editor. You can use a freeware "Curves editor software" (Win/Mac) for setup and user pattern editing. The module needs a clock to run in pattern-mode. It also features a reset input to set the sequence back to the first step. The memory in the module can save up to 99 patterns. The active pattern can be seen on the display and selected thanks to two buttons.

If Curves is in sequencer mode, the Envelope potentiometer controls the AR envelope, the Variation knob adds random velocity and release, and the Fill potentiometer controls the level of all the channels.
In manual mode, when the sequencer is off, you can select different filter-types with the Variation potentiometer: allpass, lowpass, bandpass 1-3 and highpass. Thanks to the Fill knob it is possible to sweep through the twelve filter bands. The Envelope knob smoothes the sweep by activating a second band next to the selected filter band. Thus the change from one band to another is not so abrupt.
It is also possible to play the twelve filters via MIDI like a drum module, thanks to the supplied MIDI to minijack cable. It even reacts to velocity.

The twelve bands are subdivided in odd and even bands, which you can feed or tap out separately thanks to the various inputs and outputs. Try patching the odd outputs on one side and even outputs on the other side and you will get an amazing stereo effect! ALL output features a Dry/Wet and a Level potentiometer.
Additionaly, the module features also a direct audio output and direct VCA input of each filter channel. Thus it is possible to feed gate, triggers or envelopes to the VCA of various filterbands and play them independently.

Furthermore, there are several CV inputs for controlling Envelope, Variation and Fill parameters as well as the pattern number. 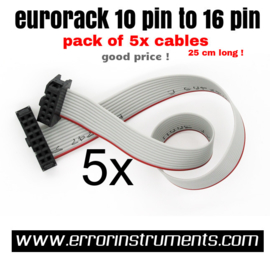