this 2 times with 4 CV's in controllable

by then the sound of chiptune or the Atari 2600

or a happy scream cat

The Atari Punk Console (commonly shortened to APC) is a popular circuit that utilizes two 555 timer ICs or a single 556 dual timer IC. The original circuit, called a "Sound Synthesizer", was published in a Radio Shack booklet: "Engineer's Notebook: Integrated Circuit Applications" in 1980[1] and later called "Stepped Tone Generator" in "Engineer's Mini-Notebook - 555 Circuits" by its designer, Forrest M. Mims III (Siliconcepts, 1984).[2] It was named "Atari Punk Console" (APC) by Kaustic Machines crew because its "low-fi" sounds resemble classicAtari console games from the 1980s, with a square wave output similar to the Atari 2600. Kaustic Machines added a -4db line level output to the circuit which was originally designed to drive a small 8 ohm speaker.

Atari Punk console is an astable square wave oscillator driving a monostable oscillator that creates a single (square) pulse. There are two controls, one for the frequency of the oscillatorand one to control the width of the pulse. The controls are usually potentiometers but the circuit can also be controlled by light, temperature, pressure etc. by replacing a potentiometer with a suitable sensor (e.g., photo resistor for light sensitivity). Most of the time there is also a power switch (often a toggle switch) and a volume knob.

The circuit is a simple DIY noisemaker circuit that is relatively inexpensive and easy to build, easily adaptable and is configurable in many ways. It has been built into a wide variety of cases, from metal IKEA bowls to light bulbs, an old Atari mouse or joystick. Its flexibility has led to wide scale popularity among electronics enthusiasts. It is often suggested as a good circuit to build for beginners. 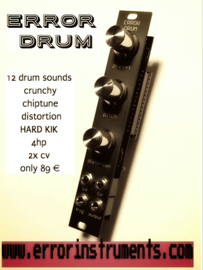